If someone arrested your friends and stole food from you and your community - all in your name - you'd probably want to know about it. In fact, you'd probably take action to correct things and see that it doesn't happen again... I know I would.

And yet this is precisely what seems to have unfolded during the August 3rd, 2011 raid on the Rawesome Foods private club in Venice and what appears to be continually happening around the country while We the People remain asleep and ignorant to (or unwilling to face) the corruption run amock in government agencies still claiming to be working for our best interests.

But what if you could give substance to that sick feeling you've only ever carried quietly inside - the one that tells you something really is wrong with this picture, that something foul or dirty or sinister is at work? What if the people you thought were just 'crazy conspiracy theorists' were actually the truth-tellers? What if you could definitively prove certain members of the government weren't really serving the People? What if you could demonstrate with concrete evidence that certain government agents closest to the investigation and subsequent arrests of your friends were never authorized - not by you, nor anyone - to investigate in the first place? What if those folks claiming to conduct their duties on behalf of the People had goofed and missed an important step somewhere, and you - a concerned citizen - could see their too hastily assumed authority now unraveling?

And what if you were beginning at last to understand that even you had - in your silent, unquestioning consent - somehow helped those perceived authorities to falsely accuse your friends, harrass and intimidate your entire community and ultimately force your neighbors into giving up their businesses or declaring bankruptcy? What if you decided no longer to wear the cloak of a victim?


If you could do all that, I expect the whole house of cards might just come crashing down. And I expect it might start a very real revolution in which the now better-informed citizens of this world unite to hold its elected and appointed leaders and government agencies accountable - to their own rules, at the very least. I further expect we'd feel both shocked at the level of non-compliance and yet empowered at our own abilities to affect change.

It could happen... Here's why:

Six full months have now passed since the Rawesome raid. (Many thanks, by the way, to folks like Mr. David Gumpert who continue to publish updates: http://www.thecompletepatient.com/journal/2012/1/27/hurry-up-and-wait-rawesome-three-get-used-to-criminal-justic.html.) Still, we former club members are likely no closer to forgetting how much more complicated it is these days to obtain the nourishing food we require. In that time, however, some of us probably have forgotten a few of the details that resulted in our having been separated from it... Details like the name Michelle LeCavalier.

So let's refresh our memories together... Savvy reporting by Natural News on the day of the raid (http://www.naturalnews.com/033224_Rawesome_Foods_search_warrant.html) kept us abreast of what was happening and revealed that it was LeCavalier's signature that appeared on the search warrant (http://www.naturalnews.com/files/RawWarrant1088-NoSSN.pdf). But little else was known about this mystery woman - so little, in fact, that Natural News had posted the following query for more information within the body of their own article:

"Who is Michelle LeCavalier?

I want to know who this state employee is and why she is engaged in authorizing acts of terrorism against innocent citizens of California. Attempts to find out more about LeCavalier have so far failed, although NaturalNews has confirmed that she is a California state employee who worked under the Dept. of Health at one point.
If you have any information about Michelle LeCavalier, or a link to an online photo of her, please let us know. This woman needs to be held accountable for her role in authorizing acts of government terrorism against the People."

Even with such limited information available, it has come to my attention that new data has recently surfaced on LeCavalier - most notably that she has NO Oath of Office on record with either the Secretary of State in California or the Los Angeles County Recorder's Office, despite her signature on the search warrant (http://www.naturalnews.com/files/RawWarrant1088-NoSSN.pdf) issued against Rawesome & Healthy Family Farms. See below. 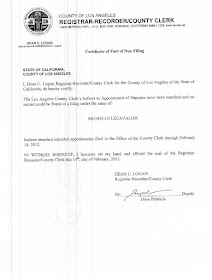 You might argue that all this Oath of Office business is simply more non-information on LeCavalier, except that this lack of filing would indicate she appears to be out of compliance with CA GOVERNMENT CODES 1360-1367, which state that "before any officer enters on the duties of his office, he shall take and subscribe the oath or affirmation set forth in Section 3 of Article XX of the Constitution of California," and that "no compensation nor reimbursement for expenses incurred shall be paid to any officer by any public agency unless he has taken and subscribed to the oath or affirmation required..."

But LeCavalier's isn't the only missing Oath of Office. Richard Ballou, Senior Investigator for the County of Los Angeles District Attorney's Office Environmental Crimes Unit, the same man listed as "Declarant and Complainant" on the 21-page complaint against the accused: http://nourishedkitchen.com/wp-content/uploads/2011/08/filed-HFF-Complaint.pdf) *also* appears to have NO Oath of Office on file. See below. 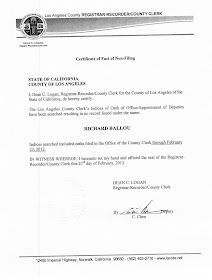 Without this solemn bond with the People, how have we any guarantee that We the People are protected from their ignorance and/or malice? What recourse do we have against any false witness borne by them against our friends and neighbors? And what's more, shouldn't these revelations call into question the entirety of the so-called "evidence" gathered by their direction in this case?

This concerned citizen would like very much to know how it is that these departments of the County of Los Angeles and the State of California claim to be in compliance with the above-named CA Government Codes, when folks with no filed Oaths of Office seem to be on the payroll. It's a simple question, really. And if there is an exception somewhere that gets them out of this requirement, then I want to see it... That's all.

After all, according to CA GOVERNMENT CODE SECTION 54950-54963 and CA GOVERNMENT CODE SECTION 11120-11132, " The people of this State do not yield their sovereignty to the agencies which serve them. The people, in delegating authority, do not give their public servants the right to decide what is good for the people to know and what is not good for them to know. The people insist on remaining informed so that they may retain control over the instruments they have created."

And anything less simply will not do. Not for me. Not anymore.

I'll leave it to more legally minded folks to discern how damaging this publicly available information may or may not be to the prosecution's case against James Stewart and the Rawesome Three. Of course, I hope that it is very damaging, and I cannot conceive of how it could be anything else but that. Even notaries, for example, cannot begin notarizing documents until they've taken an Oath of Office. And for those who might suggest that Oaths of Office are strictly ceremonial, I'd ask what would happen if the President of the United States were to neglect taking an Oath of Office. I mean, isn't that entire point of the Inauguration? Given the hostilities still lingering over disputes regarding the current President's birth certificate, I can just imagine the uproar that would ensue from the People, had Obama failed to take an Oath of Office. And in fact, I'd take issue myself with such an omission.

In the case of Rawesome, however, as a very concerned citizen whose food was [I believe] wrongfully taken and destroyed and whose access to those foods continues to be denied as a result of documents signed by LeCavalier and Ballou, I have a big problem simply continuing blindly to trust in a governmental system whose corruption seems to run always deeper. In short, I am - like many of you, I hope - beginning to wake up. And I am beginning to take action.

Please do not mistake me. I am not contesting the necessity and usefulness of some structure of government - and ideally, fellow conscientious members of government agencies will support and assist us in weeding out unlawful and unconstitutional behaviors; Rather, I am simply expressing my increasing intolerance of apparent abuses within the governmental system. That is why, I believe, these folks and all others holding government offices MUST be held accountable - not merely by their own agencies, but by the People (that's us) whom they claim to represent.

Let's not forget who sits at the top of the ladder in this government (both state and county), who is ultimately responsible for the behavior of any such ill-sorted rabble, and who therefore who has the power and authority to set things right again...

We the People.
Amen.

(Another article by Natural News with some excellent tips for how to get started: http://www.naturalnews.com/033318_government_agents_Rawesome_Foods.html. If you're outside California, why not start with a visit to the State or County Recorder's office to look into the public records of your own local government agents? Who knows what happens when you're not looking? Not you... That's for sure!)